Many are raised by single mothers, see no black teachers in the classroom, and struggle to read, he says. Brown sees his barbershop, a gathering place for men in the community, as an ideal place to help them develop their reading skills under the guidance of a male role model. His Barbershop Book Club offers free books and free haircuts to children who read aloud books from an in-store library while getting a haircut.

For children who don’t often find characters who look like them or who share their life experiences in books at school, the book club offers culturally relevant stories and profiles of important figures in Black American history. . Brown wants to help kids build a home library of books with characters who share their “name, image, likeness.”

“Some kids don’t like to read,” Brown says. “They talk about how they hate to read. One of the key elements of this program is therefore the encouragement of black men, because many single mothers bring their children to the hairdressers and do not have a father at home to encourage them or help them with their homework. So it’s a nice space, a safe space, for single moms to get their kids to get encouragement from someone they’ll grow up to be like one day about the importance of reading and the importance of falling into loving reading, where reading can take you, what reading can do for you, and the positions it will place you in. 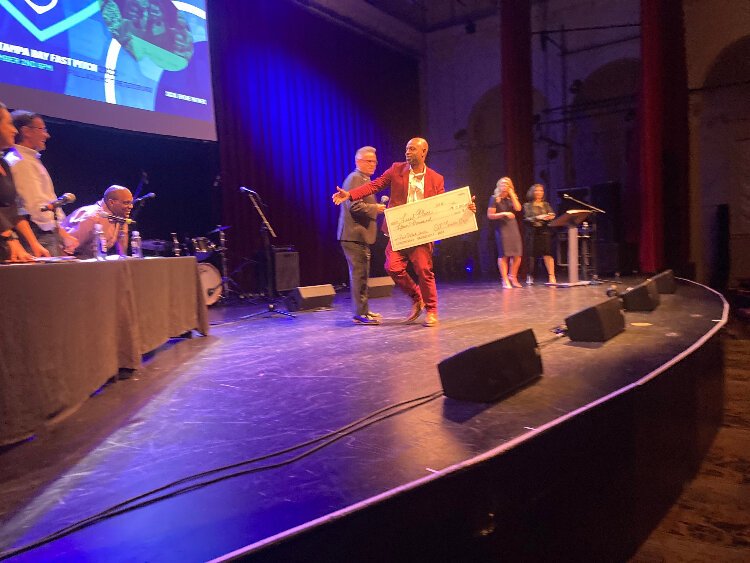 Antonio Brown, owner of Central Station Barbershop & Grooming and founder of the Barbershop Book Club, thanks the judges after winning first place at Social Venture Partners Tampa Bay’s Fast Pitch 2022 event.He plans to use the money to re-expand a program that once had 11 hair salons but had to go back to just one due to the cost of maintaining each store’s mini-libraries filled with books to donate. He also wants to take the mobile program. The plan is to get a bus equipped with a barber chair and full of books to take home for after-school programs and local events.

This year was the Tampa affiliate of SVP’s sixth Fast Pitch event.

“The idea is for people who are doing great things in the community to have their moment in the sun, so to speak, to celebrate,” said Irv Cohen, SVP Tampa Bay president and co-founder, a former Wall Street executive. . “It’s a pitch contest and we’re jointly giving out freebies with no restrictions, but it’s really to celebrate the people who are doing great work in our community. We shouldn’t just be celebrating Tom Brady or something like that. We should celebrate the people who really influence our lives.

The pitch event itself, where a panel of judges picks first, second, and third place while the audience picks their own winner, is actually the culmination of an intensive nonprofit accelerator program. month-long fundraiser that pairs leadership from participating nonprofits with a partner of mentors who have extensive nonprofit or corporate experience.

“It’s not just financial support, but coaching for nonprofits,” says Marlene Spalten, CEO of Community Foundation Tampa Bay. “The partners are excellent coaches from all walks of life. They are very experienced in leadership. The help and advice they give to nonprofit organizations is invaluable and supports our investment in them. »

“It’s exciting,” says Coraggio. “Nonprofits can take a second to brag about themselves and really learn how to communicate their voice. A lot of times they’re nose to nose with the grindstone. to people who are potential funding opportunities, but they don’t necessarily have the voice to explain to them, “This is what I do”.

Fast Pitch night spotlight and cash rewards attract attention, but work eight to 10 weeks alongside a mentor with experience in accounting, marketing, strategic planning, grant writing, or another area key may be more important in the long run for nonprofit organizations.

“I love the concept of quick stepping and the moment in the sun, but SVP is so much more,” says Coraggio. “I regularly send nonprofits to the SVP.”

Nonprofits that don’t win first place or win any cash prizes still have the opportunity to showcase their organization’s mission in front of a room full of people who may decide to support them. In some cases, the event puts a nonprofit on the radar of the Community Foundation Tampa Bay, which provides competitive grants to area charities each year. In 2021, that was the case with Safety Harbor-based 360 Eats.

Fight against food waste and poverty

After graduating from college, Cameron Macleish was backpacking the world when he discovered the phenomenon of dumpster diving. He was initially put off by the practice, but soon realized that restaurants and stores routinely threw away fresh food they couldn’t sell.

When Macleish returned home to the Tampa Bay area, he decided to start a YouTube channel featuring videos of a skilled chef, his mother Ellen Macleish, preparing gourmet meals from discarded food he picked up. by diving into the garbage cans.

“I had this crazy idea to expose food waste; it ended up exploding,” Macleish recalled.

NBC’s Today Show and the Huffington Post covered the viral video phenomenon. Macleish saw an opportunity to do more.

“It was really cool at the time to expose the realities of food waste, but it made us want to create a workable solution,” he says. “Is there a way to stop this food from reaching the dumpster in the first place and get it to the people who need the food?” We were volunteering at a few food pantries at the time and saw the reality of food insecurity in our community. We started to do our research.

Macleish learned that if he formed a 501c3 charity, restaurants and grocery stores would be willing to donate still-good food they would otherwise throw away thanks to Good Samaritan’s liability protections. Enter 360 Eats.

At last year’s SVP Tampa Bay Fast Pitch, 360 Eats pitched the idea of ​​a food truck that would allow the organization and its volunteers to take meals directly to neighborhoods where people are struggling. food insecurity. They finished third, winning $7,500. But the Tampa Bay Community Foundation took notice, and Coraggio encouraged Macleish to apply to the foundation for a grant. 360 Eats won a competitive grant of $40,000 to acquire a food truck – a converted 2003 Freightliner P30 equipped with a commercial galley, oven, stovetop burners, flat grill steam tables, three-compartment sink and a refrigerator to be exact – and start delivering meals to where people are in their catchment area of ​​northern Pinellas County.

The food truck hit the road a few weeks ago and served residents of a cul-de-sac west of Oldsmar, a community center in the area north of Greenwood to Clearwater and centers for the elderly. 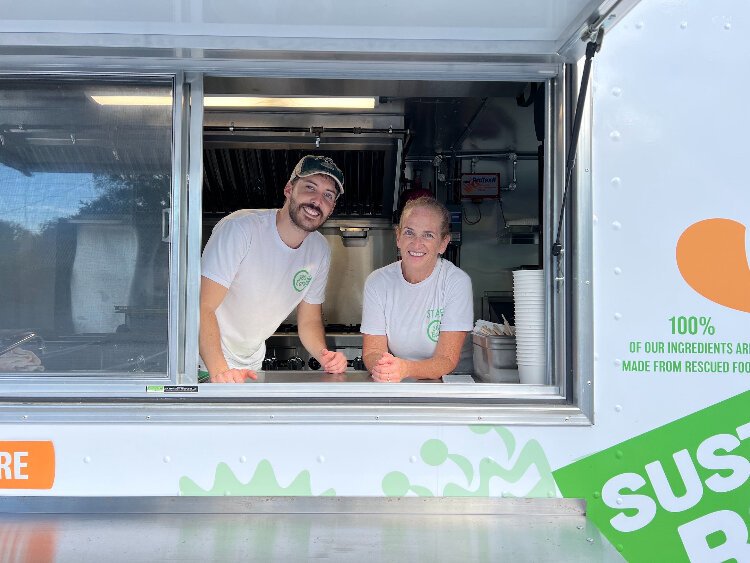 Cameron Macleish and Ellen Macleish of 360 Eats in the window display of the association’s new food truck.Without the grant, Macleish says 360 Eats would have had to take a different, likely longer route to get a food truck on the road to serve those neighborhoods. But that was just one of the ways SVP Tampa Bay helped the charity thrive.

“To have this program in place where they assign you a mentor, work with you for a few months, help you refine your strategic plan, write a very well-crafted pitch that you can use in other areas of fundraising and , overall, really honing in on what you do and really running like a business, it’s amazing,” Macleish says. “I think that’s where a lot of small nonprofits stumble. They focus on the charitable aspects of the organization, which is absolutely essential. This is why a non-profit association exists. But what we’ve learned is that it’s also a business. You have to think about sustainability. How are you going to support this long term with funding? So that really got the gears turning and got us thinking about how we’re going to handle this as a company. How are we going to maintain this as we serve the community? »