Orderly rows of lettuce, flowers and vegetables in raised bed planters bloom alongside pecan and citrus trees in the Garden Commons on the Arizona State University Polytechnic campus.

Here, students toil in the desert sun, planting bok choy, cilantro and jalapeños, while learning lessons from the land on everything from organic and regenerative farming to seed selection and germination. , composting and beneficial insects.

The garden is abuzz with nature’s diligent pollinators from one of the nation’s largest bee research facilities in the United States, nestled in a dirt lot on the southern edge of the Polytechnic campus. Here, Cahit Ozturk, a research technologist and research associate at ASU’s Bee Laboratory Annex, dons a beekeeping suit to show visitors how up to 2,000 pounds of honey is harvested each year from the more than 50 colonies of bees from the laboratory.

Nearby is a desert oasis of more than 40 varieties of rare date palms with lush fronds, textured trunks and luscious fruits that were a common delicacy 100 years ago. ASU’s date palm “germplasm” is a living genetic resource maintained for plant breeding and research. Deborah Thirkhill, program coordinator at ASU Facilities Development and Management Grounds Services, organizes a harvest every year.

ASU’s entire Tempe campus is a designated arboretum intended to be an oasis for plants from around the world, including citrus, olive, pecan, sapote, apple, peach, quince and many other harvestable trees and shrubs. Here, 260 Seville orange trees produce six to eight tons of fruit each year, harvested from January to March.

Nestled among this cornucopia of fresh fruits and vegetables grown on ASU campuses, innovators are shaping the sustainable future of food.

A longtime advocate for organic agriculture, Kathleen Merrigan literally wrote the law establishing national standards for organic foods. As former Assistant Secretary and Chief Operating Officer of the United States Department of Agriculture, she led efforts to support local food systems from 2009 to 2013.

Now executive director of the Swette Center for Sustainable Food Systems at ASU, she co-authored a new report with the Natural Resources Defense Council and Californians for Pesticide Reform to help guide U.S. policymakers on the benefits and value of agriculture practices. organic in preparation for the next version of the Farm Bill. The most recent version of this federal legislation was enacted in 2018 and is due to expire in 2023.

“Each Farm Bill is extremely important. It controls about 70% of what the USDA does and spends billions and billions of dollars,” Merrigan says. “One of the things I’ve done at the Swette Center for Sustainable Food Systems is point out that the government has underinvested in organic farming. In the USDA’s 17 agencies and hundreds of programs, probably less than 1% of the money spent is on organic. We would like to argue that it should be 6%. It’s such a modest request. It represents the amount of food currently purchased by Americans that is organic. What a world of difference that would make.

“As we face the grim news that we are not doing enough to fight climate change, I think organic is a great answer to many of the issues we face, not just in the United States, but all over the world.”

Its new report, “Grow Organic: The Climate, Health and Economic Case for Expanding Organic Agriculture”, details the potential of agriculture in the fight against climate change, health crises and economic hardship. Topics covered in the report include the ability of organic agriculture to reduce greenhouse gas emissions, protect human health and support economic resilience.

For example, organic farming eliminates the greenhouse gas nitrous oxide resulting from the use of synthetic fertilizers. And organic farming is a smart choice because it produces higher crop yields in the face of climate change.

The Rise of the Vertical Farm

A glimpse of the future of agriculture can be seen inside ASU’s vertical farm in a hidden corner of the polytechnic campus. Yujin Park, an assistant professor at the College of Integrative Science and Arts, surveys racks of strawberries and lettuce in white shipping containers growing under exotic colored lighting.

The Economist listed vertical farming as one of 22 emerging technologies to watch in 2022. Park, whose research focuses on horticulture crop physiology and controlled environment farming, says the indoor farming method could be the wave of the future in the current era of climate change. .

“Vertical farming could be a game-changer if water becomes really scarce,” she says. “In general, compared to field crop production, vertical farms can save 90-95% water for crop growth.”

The College of Integrative Science and Arts began offering a vertical farming certificate program this fall semester. Classes are taught by Park and his colleague, Zhihao Chen, an instructor teaching controlled environment chemistry and agriculture at ClSA and co-founder of Homer Farms Inc., a cleantech startup establishing a circular economy in food waste and food production. 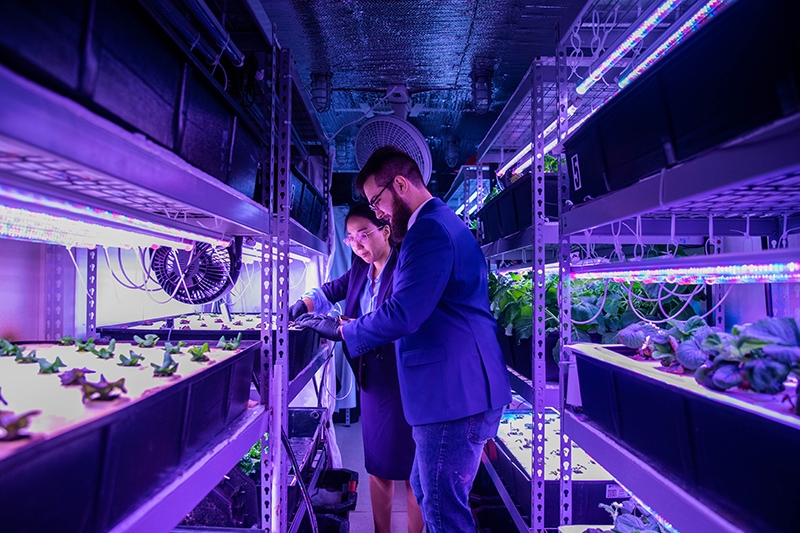 Create a buzz in beekeeping research

As bees and other pollinator populations decline around the world, the reasons remain controversial. Although fungicides have been found to be safe for bees in lab trials, ASU researcher Adrian Fisher, a postdoc in the School of Life Sciences, found that field trials paint a different picture. . His research reveals how exposure to fungicides creates serious health problems for bees, such as reduced protein digestion, reduced learning and memory abilities, and reduced lifespan.

“Taken together, these results indicate the role that fungicides may play in continuing pollinator decline and the inadequacy of current toxicity testing standards used to approve pesticide application,” Fisher said.

Researcher Nicole DesJardins is a PhD student working with Brian Smith, a behavioral neuroscientist whose research focuses on learning and memory systems in insects and mammals. In his research, DesJardins examines the effects of agricultural pesticides on the behavior of bees.

“Specifically, I found that fungicides have some negative effects on the behavior of bees. They interfere with their ability to learn new things, like flower scent associated with food. And they can cause bees to bees get lost while foraging so they can’t find their way back to the hive,” she says. “The implication is that fungicides are sprayed on a number of bee-pollinated crops, so bees could potentially be exposed to it and experience these negative behavioral effects.”

READ MORE: The sweet side of bee research 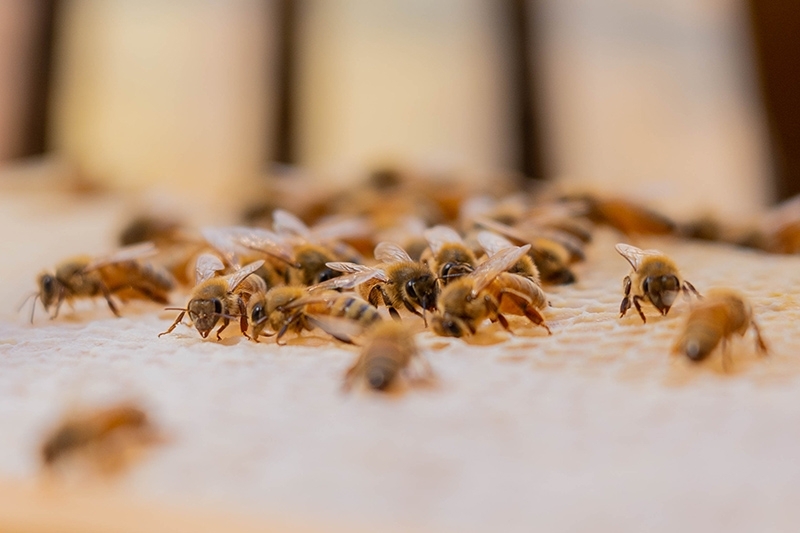 Social and worker insects, bees play an important role as crop pollinators. In fact, pollination by bees adds about $15 billion in added value to crops, according to the U.S. Food and Drug Administration. Photo by Samantha Chow/USS

A surprising number of students struggle to meet their basic needs, such as stable housing or having enough food to eat. In fact, nearly 40 percent of students in two- and four-year schools have experienced food insecurity in the past 30 days, according to an annual survey conducted by Temple University’s Hope Center for College, Community and Justice.

Responding to an important need, a weekly seasonal agricultural kiosk on the Polytechnique campus offers free fresh produce to students.

“All students have to do is show their ID, and they’re allowed to choose between three and five different fresh fruits and vegetables,” says Susan Norton, associate director of sustainability practices at the University of London. ‘KNEW. “During the cool season, we tend to have kale, lettuce, beets, carrots and peas. During our hot season we have tomatoes, eggplant, cucumbers, zucchini and basil.

All additional proceeds are donated to the Pitchfork Pantry, a campus pantry that receives, stores, and distributes food to ASU students; House of Refuge, which provides housing and wraparound support programs for homeless families; and the AZCEND Food Bank in Chandler.

Over the past three years, nearly 2,000 pounds of fresh fruits and vegetables — nearly 5,000 servings — have been donated through the Farm Stand to 525 people in need, both at ASU and in the community.

The Swette Center for Sustainable Food Systems is a unit of the Global Institute of Sustainability and Innovation.