GREAT BENDING — DIG: Field and Family Notes, a new book by Austin-based photographer Sarah Wilson, is the culmination of 10 years that the artist spent documenting the legacy of his grandfather, paleontologist Dr. John “Jack” Wilson, the University of Texas at Austin lab he founded, and his relationship to the West Texas landscape.

Wilson was among the presenters at the Center for Big Bend Studies’ annual conference last week at Sul Ross State University. She shared her personal family history, which collides with the history of Big Bend National Park, and stunning visuals from the pages of her book – a comprehensive collection of modernized fossil portraits, enduring desert landscapes, Kodachrome slides vintage and laboratory ephemera.

Later in life, Wilson and her grandfather bonded over love of the Big Bend area, she explained. Jack Wilson frequently visited the area during excavations and is credited with several important finds. In the 1950s, he was among the first paleontologists to discover early Cenozoic mammal fossils in Big Bend; in the 1960s, he made the “find of his life” in Presidio County when he discovered one of the most complete primate skulls ever found in North America, “Rooneyia viejaensis”, a surprisingly intact old fossil from 30 million years.

Sarah and her grandfather, Jack Wilson, wearing one of his signature ties, featuring an albertosaurus skull during a show and story at Sarah’s school. Photo courtesy of Sarah Wilson.

He was also among the authors of The Geology of Big Bend National Park, which he co-authored in 1967 with Big Bend National Park’s first superintendent, Ross Maxwell, among others. Wilson, who now owns the copy of his grandfather’s publication, read aloud a handwritten dedication to the conference audience, which drew laughter.

“For Jack Wilson, even if we didn’t always agree, Jack could find fossils, which put me in my place. Ross Maxwell.

In 1949, Jack Wilson founded the Texas Vertebrate Paleontology Collections at the University of Texas at Austin, now the fifth largest collection of vertebrate fossils in North America. “The building was a former World War II magnesium smelter, and it’s now filled with fossils, endless shells of dinosaur bones, tiny mammalian bones and mammoth skeletons.explained Wilson, the first and only artist-in-residence at the lab.

Wilson visited the lab growing up, but did so more frequently as an adult following her grandfather’s death in 2009. She recalled how her grandfather brought a cast of a albertosaurus skull on his elementary school show, and described his affinity for bolo ties.

“He made some of his own ties from rocks and bones, from fossils he found, or he got coins or trinkets when he traveled around the world to visit other people. paleontologists,” Wilson said. 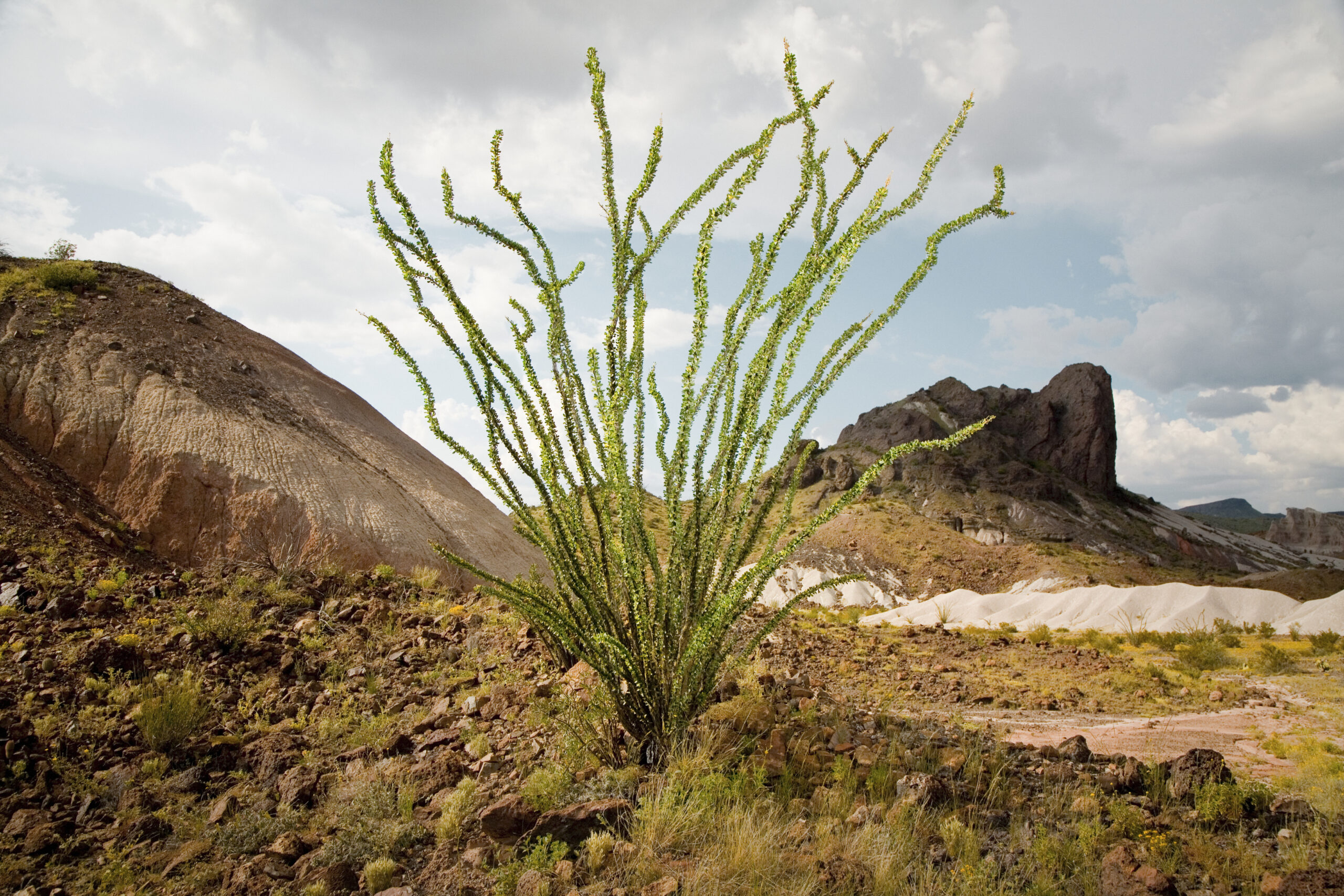 Shortly before his 94th birthday, Jack Wilson fell ill with pneumonia, she continued. During a visit to her hospital room, she hung up a photo she had taken of a thriving ocotillo plant in the national park. Her grandfather was able to immediately identify the exact spot where the photo was taken, she said, warning the public that is where she gets emotional.

“He sat up a little tall and he took his respirator off and had this moment of clarity,” she said. “He was right – the rock formation in the background is directly across from Castolon Peak. At that moment, I felt we were more connected than ever. He died a few hours later.

Since his passing, Wilson has kept in touch with her grandfather through routine visits to the lab, where she has used her trained eye as a photographer and storyteller to shed light on the collection, which consists of over a million new ways, with the help of current lab director Matthew Brown, who also wrote an essay for his book. Brown’s words follow an account of his profession by Jack Wilson himself, broadcast on the airwaves and printed in the local newspaper in the 1930s in Massachusetts, where he was originally from. 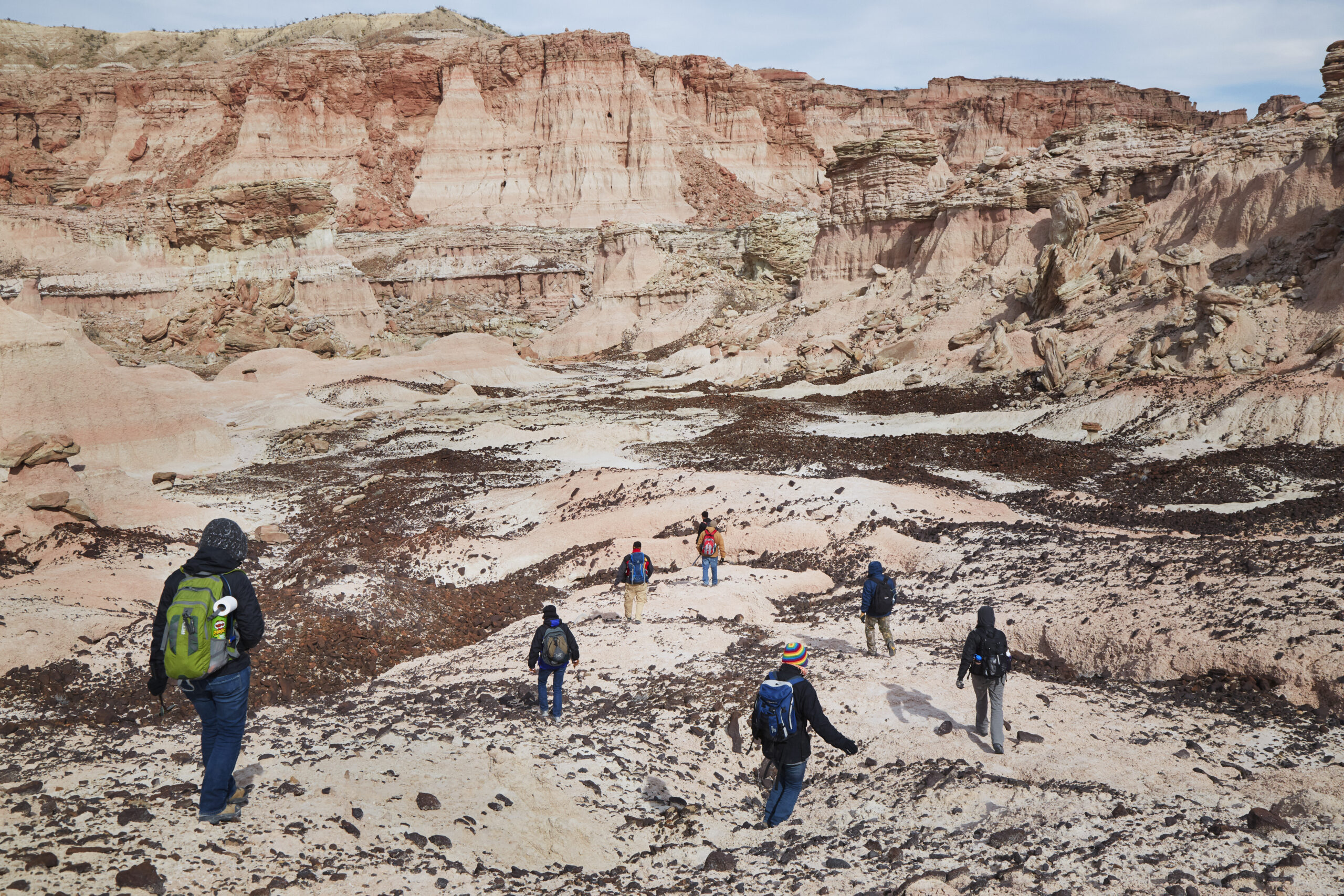 Wilson has also accompanied UT professors on excavations in West Texas over the past 10 years, including at the Dalquest research site in Terlingua. She said she exercises skills similar to creating art when digging – patience and attention to detail. On her second trip, she found a piece of jawbone with two molars intact, which turned out to be the first known lower jawbone of Texadon, a deer-like mammal that lived 43 million years ago. The specimen now sits in its own cardboard box inside a drawer in the laboratory alongside some of his grandfather’s finds from the same locality discovered fifty years previously.

In an interview with The Big Bend SentinelWilson said putting the book together after accumulating images for a decade was a challenge and forced her to question Why she was doing the work and how it related to her.

“I think the book itself needed to be a bit more of a general interest story where you could tune into it if you were a paleontologist or a geologist, and see a similar story. But you might also see it as someone who recognizes it as a personal journey or a journey to get to know your family better,” Wilson said. 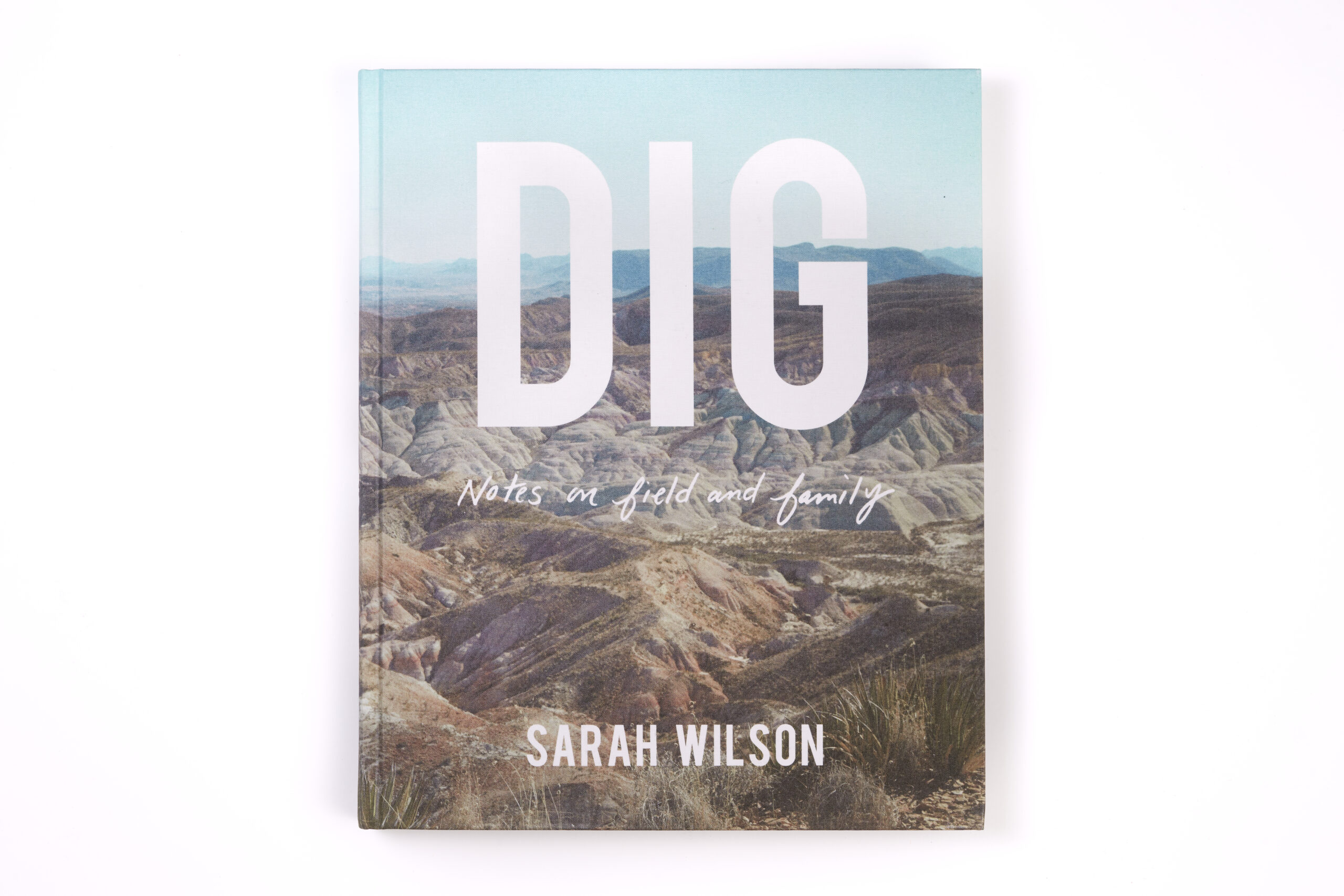 In the book, collages of landscapes shot with his grandfather’s Pentax Honeywell film camera take up two pages and showcase the geological diversity of the Big Bend region. Other unique landscapes consist of Wilson holding Jack Wilson’s old Kodachrome teaching slides in front of the camera, the same magnificent rock formation or seen in the background, illustrating his passing and their shared visions.

Documenting such a naturally beautiful and heavily photographed area, Wilson said she spent time thinking about the landscapes and how she could make the scenes more interesting. She often has to go with the flow during her digs and is unable to wait for the perfect lighting moment, but relied on her artist’s intuition, she said.

“There are times when I know I’ve taken a photo that matches my style. There are a lot of pictures I took that weren’t,” she said. “But sometimes you have the right lens, you’re standing in the right place, the light is just perfect, there’s enough shadow, where [you go], ‘Oh, it’s me. I connect with this. ”

Wilson has had a relationship with the West Texas desert for some time, first traveling to Marathon one summer in the 90s to help photographer James Evans print his Big Bend Pictures book. But at the time, she says, she didn’t know how to interact with the vast area and felt she had no obvious connection, no land, seemingly no history, until she learned more about it. the presence of his grandfather in the region and experience it. to rake the hillsides in search of bones and interact with them.

“My connection to this land is not only mine, but also my grandfather’s, and there’s something about being able to go to these digs, where it’s not just like the tourist’s version of the picture-perfect landscape we’ve seen a million times,” Wilson said. “No, I’m in the mud. It’s part of me, I’m part of it. These hillsides are cemeteries of animals from 40 million years ago. 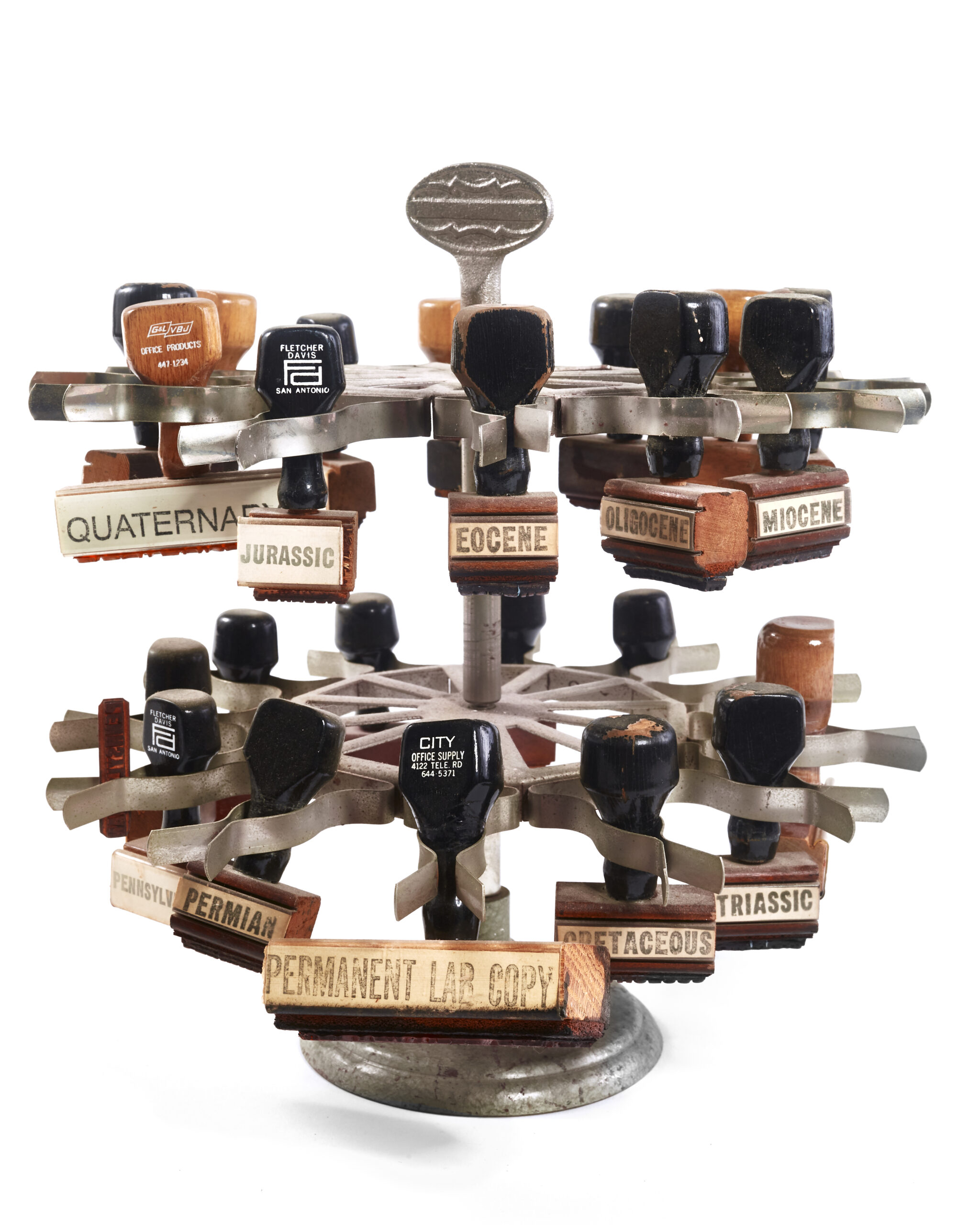 Wilson’s book echoes the aesthetic of his grandfather’s world. The penciled, cursive titles are a tribute to his field notes – where he documented his discoveries and activities, such as a visit to Study Butte for groceries and mail. The lab labels also get a shoutout, it using the same typewriter font. Wilson’s affinity for the laboratory’s lesser-known collection of old containers, such as Falstaff beer cans and cigarette cartons, shines through in his photographs, which bring together the laboratory’s fossils, current employees, and artifacts. A photograph from the book features a collection of deep timestamps – “Jurassic”, “Eoscene”, “Permian”, etc. – used for labelling.

The lab is still furnished with mid-century furniture, dominated by materials of rock, wood and metal, which Wilson said she finds comforting. “I miss him and I miss his lifestyle too. I miss that age, that mid-century period, when things were really good and beautifully done.

Wilson borrowed various lab equipment, as opposed to traditional pedestals, to help showcase the lab’s extensive collection of fossils, allowing the fossil portraits to take on more personality than your typical National Geographic-style photo. A screen used to sift sand also serves as a frame for a skull; a ceratopsian skull rests on a wheeled cart surrounded by archive shelving. “[It] takes lighting, takes a long time to get him to sing,” Wilson said. 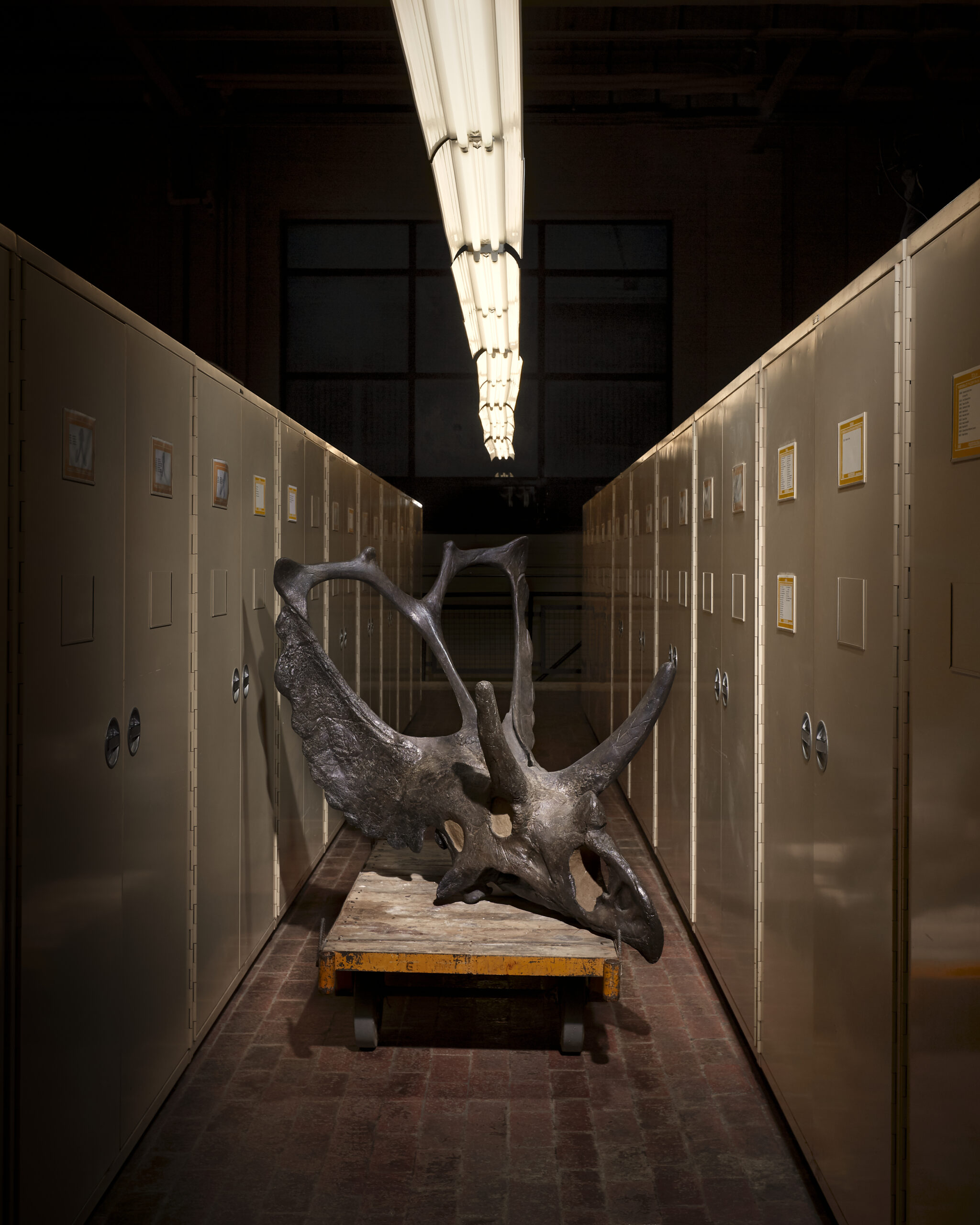 A ceratopsian skull on a cart at the Texas Vertebrate Paleontology Collections. Photo by Sarah Wilson.

At a recent family reunion, while leafing through an old photo album of paleontologist memorabilia she recognized while sipping margaritas at her grandparents’ home on Lake Austin, Wilson recalled her role in perpetuating of her grandfather’s legacy – at heart, she says, they share the same adventurous spirit.

“From my family’s perspective, as someone who continues my grandfather’s life and what he did and reminds everyone that this is something to think about and consider special, I love being able to highlight it and portray it in a way that is, I don’t know, art,” laughs Wilson.

DIG: Field and Family Notes, is available in presale via Yoffy Press until November 30. Art prints and a private tour of UT’s Vertebrate Paleontology Lab are also available through Wilson’s publisher. Wilson’s body of work will also be exhibited at Marfa’s Do Right Hall this summer.