15 June 2022, 12:39 · You may know violinist Anthea Kreston for her online teaching during the pandemic or her Inside Music Academy, or as a former member of the Artemis Quartett in Berlin, or sometimes blogger on Slipped Disc…

But in the end, it really is a library worm. 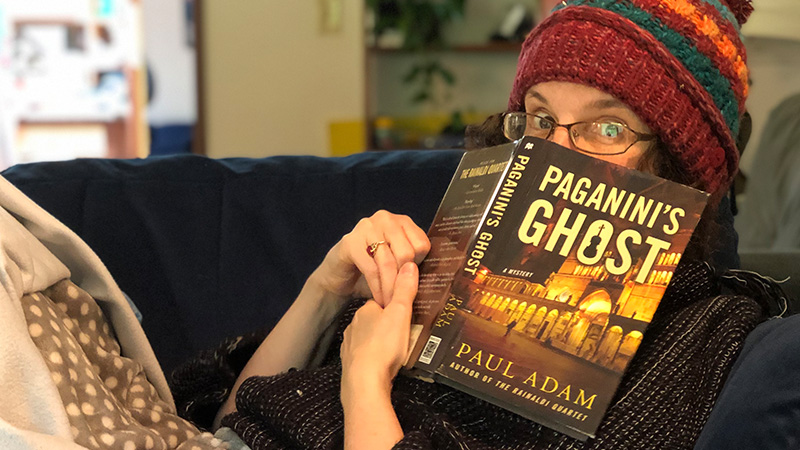 “I would proudly describe myself as a bookworm!” Kreston said. “There’s nothing better, I think, than curling up with a good book – disappearing into a different world for a while.”

It’s no surprise that she launched a “Biweekly Book Club,” featuring books about music and musicians, in 2018 on Slipped Disc. But now that we’ve all been through a pandemic and learned to use the internet in new ways, Kreston is ready to revive the idea as a live, interactive Zoom (or on-demand) weekly event.

Now called “Inside Music Book Club,” it will kick off July 6 and run for six Saturdays in a row, from 9-10:30 a.m. PST. (Click here for more info — it’s $89 for all six sessions.) The first book will be the 2010 mystery Paganini’s Ghost, by Paul Adam. (Adam also wrote the Rainaldi Quartet, a book that I thoroughly enjoyed.)

“It’s going to be so much fun to relaunch on Zoom – the platform is opening it up wide,” Kreston said. “Not only will we have a special tour of author Paul Adam, but also music from the book performed by violinists from Amsterdam, Chengdu and New York; a visit to a luthier; virtual tours in Rome, Venice and Cremona; and even a private tour of Bein & Fushi to see rare instruments. It’s going to be so much fun – and so much more variety than a regular book club!”

Of course, she loves a regular book club – that’s what gave her the idea in the first place. “I’ve always loved going to book clubs at my local library or at friends’ houses,” she said, “it’s so comfortable and the conversations always end up somewhere completely different from where they were. have started.”

Although practicing and listening to music has a direct impact on the way we play the violin or any other instrument, reading can enhance our musical creation in other ways.

“Music and reading have so much in common,” Kreston said. “As musicians we are on an endless quest to emotionally connect to different time periods, cultures, histories. A lot of it is instinctive, but to better understand the music we play, I love to draw on books I read: battles of war, lost loves, tragedy and triumphs Not just to know where a composer was born, but to understand the world around him, the things that shaped music, the world as it was or as it is.

What prompted her to choose the book “The Ghost of Paganini”?

“Well, it’s just a simple, good, easy-to-read, old-school thriller,” Kreston said. “Based in Cremona, the protagonist is a luthier who is also an amateur violinist. There are real historical events wrapped in a fictional murder mystery. Lots of fun!”