Olive green and maroon, the fields surrounding Büchel Air Base in Germany’s Western Eifel region match the camouflage uniforms of American airmen stationed there. The area is sparsely populated, dominated by leafy trees and small houses. The neighboring town of Büchel has less than 1,200 inhabitants.

The United States is said to have several nuclear warheads at Büchel.

On Thursday, the airbase was on heightened alert. This is due to the anti-nuclear demonstrations, which gathered a few dozen people in front of the base’s barbed wire fence.

Peace activists did not appear to pose a threat. They set up a red tent and sunroof, where they sat folding flowers and colored paper cranes ahead of Thursday’s protest action – symbols of the anti-nuclear war movement.

“Yes, there are only a few of us,” said activist and organizer Johannes Oehler, who sits on the board of the International Campaign to Abolish Nuclear Weapons in Germany.

“That’s one of the reasons I started getting involved,” said Oehler, 32. “I felt like there was a very small number of people interested in this issue, despite its importance and the threat of nuclear weapons.”

“We must prevent the use of nuclear weapons,” Oehler said.

The United Nations General Assembly adopted the Treaty on the Prohibition of Nuclear Weapons on July 7, 2017. For nations party to it, the treaty prohibits the development, testing, production, storage, stationing, transfer, use and threat of use of nuclear weapons, as well as aiding and abetting prohibited activities. Only 66 countries have ratified it – Germany is not one of them.

Oehler said the treaty was a success for the peace movement. He hopes that Germany will join him.

“As long as there are nuclear weapons, they will eventually be used,” Oehler said. “We must prevent these weapons from being used again. And this is the only way.”

In the 1980s, the German peace movement was strong and thousands of people took to the streets to protest against the deployment of American weapons in the country. With the end of the Cold War, the peace movement saw its numbers dwindle.

Russia’s invasion of Ukraine has once again shone a spotlight on US nuclear warheads in Germany – and the German warplanes that could carry them. 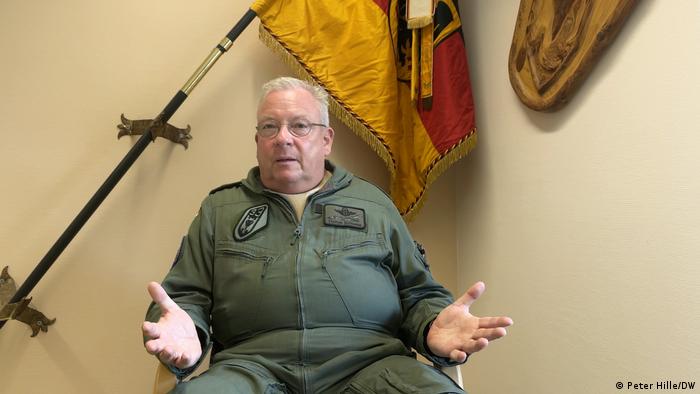 Man at the controls

Colonel Thomas Schneider has under his command the 33rd Tactical Air Wing of the German Air Force.

His desk is adorned with a series of trophies and models of the Tornado, which the Bundeswehr aims to soon replace with the latest US F-35 jets.

In March, the German government announced that it would buy the military F-35 stealth fighter jets to replace and phase out aging Tornado jets from 2025 to 2030. This is part of the Bundeswehr’s modernization plans, for which a fund €100 billion ($102 billion) special is being put together.

“We expect the first aircraft to arrive by 2026, 2027,” Schneider said, adding that an infrastructure overhaul to accommodate the new jets is already underway.

“I’ve flown the Tornado for 25 years. It’s a beautiful plane, a wonderful plane,” Schneider said. “It breaks my heart a bit to see them replaced,” he added.

Russia has issued veiled threats of nuclear attack if the United States or EU allies intervene directly in the invasion of Ukraine. Schneider declined to speculate on whether this raised the threat level or made a nuclear attack more likely.

“We are ready,” Schneider said. “My job is to keep the [people on base] calm, to talk to them, to tell them what we are. But I’m not afraid it’s more likely than before,” he said.

People lined up outside a kebab shop in central Büchel on Thursday. Most of them were dressed in sweatpants; a woman was wearing a military uniform. They waited for their meals.

“Most of our customers are base soldiers,” said the middle-aged man working behind the counter.

The base is the city’s main source of economic sustenance.

Werner Gevenich, a 65-year-old pensioner, was waiting for his lunch. He said living near nuclear bombs didn’t bother him at all.

“If there is a nuclear war, we will all be dead,” he said. “So it doesn’t matter whether we’re sitting right next to it or further away.”

Soldiers eating at the snack bar were undisturbed by peace activists – as long as the protest did not block their access to the base.

While You’re Here: Every Tuesday, DW editors round up what’s happening in German politics and society. You can sign up for the weekly Berlin Briefing email newsletter here.